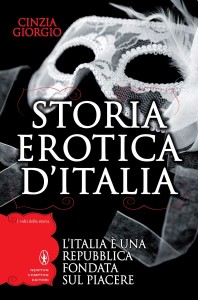 From the blog The Sexplorer by Alice Politi

Lovestories, scandals, private lives. A writer enters our ancestors’ bedrooms and explores how italian people sexual behaviors have influenced the course of Italian history. Up to the birth of famous myths such as the renowned “Latin lover”

Who has always believed that the great decisions of our history had been taken at a roundtable, by a small group of men, in a sort of “control room”, should think again. Because the destinies of people, cities, sometimes of entire nations, are not always depended on the strategic choices of great chiefs and leaders, but often by their sexual behaviors, by the influence of their lovers and by decisions taken in their spicy alcoves! And if women, for centuries, have suffered their socially inferior status, throughout history they have also been able to redeem themselves from the shadows attending the beds of the most illustrious men and acting in many cases as best influencer, for better or for worse, upon topical choices and events. Behind every great man, there often was a great lover. And Italy is the proof.

Which was the most difficult argument to treat?
«The Italian history of the last fifty years. The material I had available was endless! I was not scared of that, but rather of the contradictions between the sources».

How have Italians changed over time, from a sexual point of view?
«I just noticed a certain continuity in their sexual customs and habits. The issue of female sexual freedom actually has had ups and downs. Perhaps, the only real change is taking place just now: Italian women have become very demanding, some say because they are accustomed to the best, according to others because they are more emancipated now than in other times. It is hard to say now, posterity will judge».

What, however, remained the same?
«Almost everything. For Italians sex has always been important and, in different moments, playful and sinful».

Does the myth of the Latin lover has roots in the Italian past?
«Yes, I think our first Latin lover was Caius Julius Caesar, whose detractors said to be “the husband of all wives and the wife of all husbands” since he had an intense sexual life. Her lovers were often his enemies’ wives, and it was said that King Nicomedes of Bithynia had been his lover. In short, it seems that Caesar didn’t miss anything».

What was the relationship that has most influenced the history of the country?
«Maybe I should mention the Countess of Castiglione who was “immolated” – without too much sacrifice, it seems – for the Italian unification by sleeping with the French emperor Napoleon III».

The female figures more decisive?
«Lots. From the wonderful Julia, the daughter of Augustus, to the equally important and beautiful Matilda of Canossa. From Teresa Guiccioli to the same Countess of Castiglione, ending with all the women who fought for the affirmation of our rights, even in the private sphere».

The history of Italy would probably had been different if …
«If the son of Caesar and Cleopatra had survived, if Boccaccio had not loved so much women to devote them their masterpiece, if Matilda of Canossa’s husband would not had suffer from male impotence, if the nun of Monza had been chaste and if Casanova had had less lovers. In short, Italians are what they are because of their history between the sheets! And remember that abroad some say “Italians do it better”…».